When the Japanese beetle and its grubs move into our lawns and gardens and begin feasting on our raspberry bushes, grapevines, linden trees, roses bushes, and other beloved plants they can devastate our plants and frustrate us mightily. These beetles can be destructive to flowers and foliage, and while most plants can survive their onslaught and won’t die, they can ruin the flowers you’ve worked so hard to grow, so you never get to enjoy them. They can also stress the plant so much it doesn’t produce flowers and fruit as it should. In some instances, they can fully decimate a plant, but if you have an infestation, we have some solutions that can help!

These ironically beautiful copper and green beetles start out life as white grubs and while in their feeding stage, eat the roots of your lawn. This feeding can reduce the root system enough that grass can die in the summer heat and dry winds. If you have brown patches of grass on your lawn that are easy to peel up, then you may be dealing with a Japanese Beetle grub issue. Grubs can be treated with a granular treatment, Bonide Grub Beater, which can eliminate grubs and the lawn damage they cause. Sargent’s carries this product and our staff can walk you through its use.

Adult Japanese Beetles typically show up sometime in early July and hang around through August. You’ll see them crawling or flying around plants like roses, grapes, and raspberries, where they chew on the leaves of these plants, leaving them with a lacy or skeletonized look, and eat the blossoms off of roses and other flowers. During this whole period, they eat, mate, and lay eggs on your lawn to start the cycle again next year. 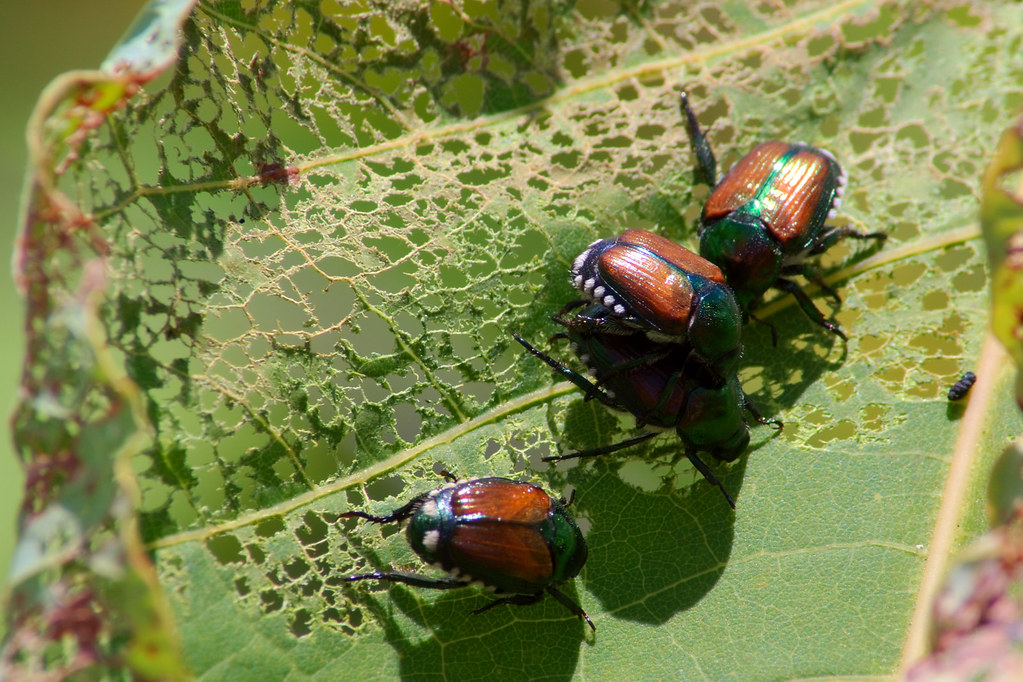 There are a variety of sprays, lawn treatments, and traps to deal with these pesky insects at any stage of their life cycle!

Adult beetles are best physically remove them from your plants with a gloved hand, but don’t squish them! Squished bugs emit pheromones, which end up attracting more beetles…Take the captured beetles and toss them in a bucket of soapy water. Why soapy? Good question! The soap breaks the surface tension of the water so they cannot escape by crawling up onto the water’s surface and flying back out. After a day or two of collecting, you can toss the dead beetles out and start over if need be.

If you are looking for a less time-consuming approach, Sargent’s carries several sprays like Bonide’s Captain Jack’s Dead Bug, Beetle Killer, or Eight. These sprays can be used to kill the beetles, but pay attention! They can also kill beneficial insects like bees, so read and follow all directions on the label and don’t spray where bees are feeding!

Finally, you can use Beetle Traps to attract and kill beetles.

Beetle traps are controversial as they are shown to perform their task of LURING beetles to the trap quite well. They use pheromones to attract the beetles to them and these things really work! Because they LURE beetles in, you really do not want to hang these anywhere near the crops, trees, or flowers you’re trying to protect (OR near your neighbor’s plants either)! If you go this route, choose to hang your trap at least 30-40ft away from any plants that are important to you or others in the area. They do work very well to draw beetles in and kill them, so check your traps every few days to empty them before they get too full or too smelly. (It’s a container of dead bugs, it’s not going to smell pretty.)

Stop into Sargent’s and our friendly staff can help walk you through your options! And for more information check out the video below: