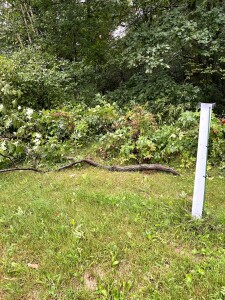 Our area saw a lot of storm damage this past weekend. We haven’t heard of any injuries, so we hope that everyone is okay, but a quick drive around Red Wing after Saturday’s storm proved that most people had at least some cleanup to do.

Branches large and small scattered the sidewalks and roadways, whole trees limbs fell onto houses and parked cars and in some cases entire trees were lost and that is always hard for homeowners. 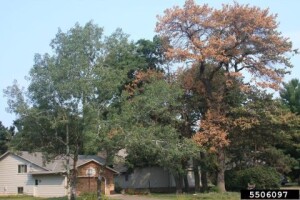 There’s the cleanup, the property damage, maybe an insurance claim… and then when that’s all over, you’re left with a gaping hole in your landscape—sunshine in a place that was once a shady refuge, or exposure where you once had privacy. As if that weren’t enough, folks who had damage to large shade trees begin to worry about their tree’s exposure to disease and pests with the open wounds they’re left with.  One of our long-time customers suggested people might benefit specifically from know-how to stave off Oak Wilt. 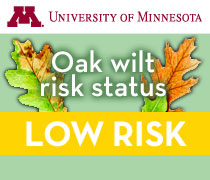 Oak Wilt is caused by a fungus called Ceratocystis fagacearum and it kills a large number of trees every year in Minnesota. Luckily we are in what is considered a LOW RISK season, which began mid-July. But it is still a good idea to make a fresh cut and cover the wounded areas with a Wound Sealer of some sort. (Shameless plug: you can—of course—buy these from Sargent’s if you’re interested.) We don’t necessarily think every pruning cut needs to be sealed every time a cut is made, but in the instance of a damaged oak during the growing season, it can help mitigate the risk of Oak Wilt.

The University of Minnesota Extension has created an informative page on their website that we are going to share with you here. You can find facts and recommendations about preventing Oak Wilt, which is important as there is no known cure to date and it takes a long time to grow those large and lovely oak trees! We highly recommend you follow the link and check out the great resources available to us all!